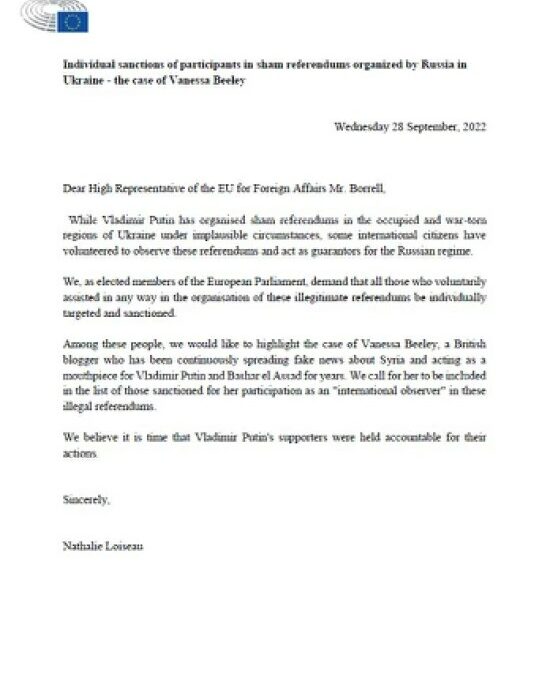 MEP Nathalie Loiseau of France is lobbying for individual sanctions on all observers of the Russian-organized referendums in the Donbass region. She has singled out journalist Vanessa Beeley not only for her coverage of the vote, but for her reporting on the foreign-back war against Syria’s government.

By Max BLUMENTHAL and Anya PARAMPIL

A French Member of European Parliament (MEP), Natalie Loiseau, has delivered a letter to EU High Representative of Foreign Affairs, Joseph Borrell, demanding the European Union place personal sanctions on all international observers of the recent votes in the Donetsk and Lugansk People’s Republics and certain Russian-controlled territories in eastern Ukraine.

Obtained by The Grayzone from an EU source, the letter is currently being circulated among European parliamentarians in hopes of securing a docket of supportive signatures.

“We, as elected members of the European Parliament, demand that all those who voluntarily assisted in any way the organization of these illegitimate referendums be individually targeted and sanctioned,” Loiseau declared.

The French MEP’s letter came after a group of formally Ukrainian territories held a vote on whether or not to officially incorporate themselves into the Russian Federation in late September. Through the popular referendum, the independent Donetsk and Lugansk People’s Republics, which announced their respective successions from Ukraine in 2014 following a foreign-backed coup against the government Kiev, as well as the regions of Kherson and Zaporozhia, voted overwhelmingly in favor of joining the Russian Federation.

Loiseau singled out Vanessa Beeley, a British journalist who traveled to the region to monitor the vote. Extending her complaint well beyond the referendum, the French MEP accused Beeley of “continuously spreading fake news about Syria and acting as a mouthpiece for Vladimir Putin and Bashar el [sic] Assad for years.”

Loiseau, a close ally of French President Emanuel Macron, specifically demanded Beeley be “included in the list of those sanctioned.”

Beeley responded to Loiseau’s letter in a statement to The Grayzone: “Imposing sanctions on global citizens for bearing witness to a legal process that reflects the self-determination of the people of Donbass is fascism. Should the EU proceed with this campaign, I believe there will be serious consequences because the essence of freedom of speech and thought is under attack.

In mid-September 2022, Beeley and around 100 other international delegates traveled to eastern Europe in order to observe a vote to join the Russian Federation in the regions of Kherson, Zaporozhia, and the independent republics of Lugansk and Donetsk.

Why did their presence trigger such an outraged response from Western governments? The answer lies in the recent history of these heavily contested areas.

The formally Ukrainian territories of Kherson and Zaporozhia fell under Russian control earlier this year as a result of the military campaign launched by Moscow in February, while the Donetsk and Lugansk People’s Republics declared their independence from the government in Kiev in 2014.

Russia began its special military campaign in Ukrainian territory on February 24. The operation followed Moscow’s decision that same week to formally recognize the independence of the Donetsk People’s Republic and Lugansk People’s Republic (the Donbass Republics) in Ukraine’s eastern Donbass region. Pro-Russian separatists in the Donbass have been embroiled in a bloody trench battle with the US-backed government in Kiev since 2014.

Ukraine’s civil conflict broke out in March 2014, after US and European forces sponsored a coup in the country that installed a decidedly pro-NATO nationalist regime in Kiev which proceeded to declare war on its minority, ethnically Russian population.

The territory of Crimea formally voted to join Russia in March of that year, while the Donetsk and Lugansk Republics in Ukraine’s eastern Donbass region declared their unofficial independence from Kiev that same month. With support from the US military and NATO, Ukraine’s coup government officially declared war on the Donbass in April 2014, launching what it characterized as an “Anti-Terrorist Operation” in the region.

Russia trained and equipped separatist militias in Donetsk and Lugansk throughout the territories’ civil campaigns against Kiev, though Moscow did not officially recognize the independence of the Donbass republics until February 2022. By then, United Nations estimates placed the casualty count for Ukraine’s civil war at roughly 13,000 dead. While Moscow offered support to Donbass separatists throughout the 2014-2022 period, US and European governments invested billions to prop up a Ukrainian military that was heavily reliant on army and intelligence factions with direct links to the country’s historic anti-Soviet, pro-Nazi deep state born as a result of World War II.

Ukrainian armed forces reportedly flew the flag of the German Third Reich from their position in the Donbass, according to surveillance footage from militias on the pro-Russian side pic.twitter.com/ezwmBHo1bs

Russia’s military formally entered the Ukraine conflict in February 2022, following Moscow’s recognition of the Donbass republics. While Russian President Vladimir Putin defined the liberation of the Donbass republics as the primary objective of the military operation, he also listed the “de-nazification” and “de-militarization” of Ukraine as a goals of the campaign. As such, Russian troops have since secured control of Ukrainian territories beyond the Donbass region, including the territories of Kherson and Zaporozhia.

Facing increased Western investment in the Kiev-aligned bloc of Ukraine’s civil war, authorities in the Donbass republics announced a referendum on membership in the Russian Federation in late September 2022, with Moscow-aligned officials in Kherson and Zaporozhia announcing similar ballot initiatives. Citizens in each territory proceeded to approve Russian membership by overwhelming majorities.

The results of the referendum not only threatened the government in Kiev, but its European and US backers. Western-aligned media leapt to characterize the votes as a sham, claiming Moscow’s troops had coerced citizens into joining the Russian Federation at the barrel of a gun. Their narrative would have reigned supreme if not for the hundred or so international observers who physically traveled to the regions in question to observe the referendum process.

Observers like Vanessa Beeley now face the threat of returning home to the West as wanted outlaws. But as Loiseau’s letter made clear, the British journalist was in the crosshairs long before the escalation in Ukraine.

Beeley among European journalists targeted and prosecuted for reporting from Donetsk

Vanessa Beeley was among the first independent journalists to expose the US and UK governments’ sponsorship of the Syrian White Helmets, a so-called “volunteer organization” that played frontline role in promoting the foreign-backed dirty war against Syria’s government through its coordination with Western and Gulf-sponsored media. Beeley also played an instrumental role in revealing the White Helmets’ strong ties to Al-Qaeda’s Syrian branch, as well as its members’ involvement in atrocities committed by Western-backed insurgents.

Beeley’s work on Syria drew harsh attacks from an array of NATO and arms industry-funded think tanks. In June 2022, the Institute for Strategic Dialogue (ISD), which receives funding from a variety of NATO states, corporations and billionaires, labeled Beeley “the most prolific spreader of disinformation” on Syria prior to 2020. (According to ISD, Beeley was somehow “overtaken” by The Grayzone’s Aaron Mate that year). The group did not provide a single piece of evidence to support its assertions.

Though Beeley has endured waves of smears, French MEP Natalie Loiseau’s call for the EU to sanction the journalist represents the first time a Western official has moved to formally criminalize her work. Indeed, Loiseau made no secret that she is targeting Beeley not only for her role as an observer of the referendum votes, but also on the basis of her opinions and reporting on Syria.

Loiseau’s push to issue personal sanctions against EU and US citizens comes on the heels of the German government’s prosecution of independent journalist Alina Lipp. In March 2020, Berlin launched a formal case against Lipp, who is a German citizen, claiming her reporting from the Donetsk People’s Republic violated newly authorized state speech codes.

W/o explanation, @YouTube has demonetized my interview w/ Alina Lipp, the only German journalist in Donetsk

The German state has seized funds from Lipp’s bank account and is prosecuting her under new speech laws for her reporting on Ukrainian war crimes https://t.co/No7OjRb8be pic.twitter.com/93BRKVq2FF

Prior to Lipp’s prosecution, the Institute for Strategic Dialogue launched a media campaign portraying her as a disseminator of “disinformation” and “pro-Kremlin content.”

In London, meanwhile, the UK government has imposed individual sanctions on Graham Philips, a British citizen and independent journalist, for his reporting from Donetsk.

And in Brussels, Loiseau’s campaign against Beeley appears to have emerged from a deeply personal vendetta.

Who is Natalie Loiseau?

In April 2021, Beeley published a detailed profile of Loiseau at her personal blog, The Wall Will Fall, painting the French MEP as a regime change ideologue committed to “defending global insecurity and perpetual war.” Beeley noted that Loiseau served as a minister in the government of French President Emanuel Macron when it authorized airstrikes in response to dubious allegations of a Syrian government chemical attack in Douma in April 2018.

Beeley also reported that Loiseau has enjoyed a close relationship with the Syria Campaign, the public relations arm of the White Helmets operation. This same organization, which is backed by British-Syrian billionaire Ayman Asfari, was the sponsor of the Institute for Strategic Dialogue report which branded Beeley a “top propagator of disinformation” on Syria.

Loiseau has taken her activism into the heart of the European parliament, using her position as chair of the European Parliament’s Subcommittee on Security and Defense to silence colleagues who ask to many questions about the Western campaign for regime change in Syria.

During an April 2021 hearing, MEP Mick Wallace attempted to question Organization for the Prohibition of Chemical Weapons (OPCW) Director General Fernando Arias about allegations he personally aided the censorship of an OPCW investigation which concluded no chemical attack took place in Douma, Syria in April 2018.

Loiseau immediately descended into a fit of rage, interrupting Wallace and preventing him from speaking.

Wallace responded with indignation, asking, “Is there no freedom of speech being allowed in the European Parliament any more? Today you are denying me my opinion!”

.@wallacemick of Ireland asked OPCW chief Arias whether he will account for the scientific fraud in the Douma investigation and why he’s refused to meet the dissenting inspectors. Wallace was interrupted by the chair, and Arias refused to answer: pic.twitter.com/c043R3111V

A year later, Wallace and fellow Irish MEP Clare Daly sued the Irish network RTE for defamation after it broadcast an interview with Loiseau during which she baselessly branded them as liars who spread disinformation about Syria in parliament.

Now, Loiseau appears to be seeking revenge against Beeley, demanding that she be criminally prosecuted not just for serving as a referendum observer, but for her journalistic output.